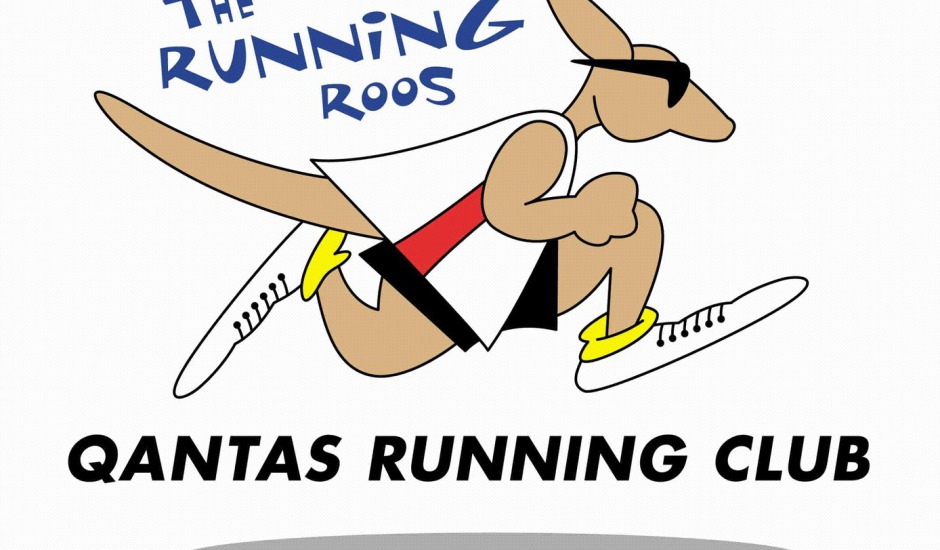 The Qantas Running Club was formed around 1970 and was originally known as the Joggeroos.

In the 70’s the Joggeroos invited members of the Delta Dusters running club to Sydney to participate in the City to Surf 14km run from the City to Bondi beach.

Other gatherings, both formal and informal, in Texas, Finland, Spain, Portugal and Georgia, including the latter’s Peachtree Classic, served as a springboard for airline clubs to devise an annual airline road-race held in different locations around the world and to encourage the participation of as many airlines as possible.

The Display case at the jet base contains trophies won during this time Including:

Early members included Albie Thomas, Steve Ruston, Lou Lombardi, Dave Humphreys and others. The club entered teams into local runs including the City to Surf, the Sutherland to Surf, the Randwick Half Marathon, the Palm Beach to Manly run and the Sydney to Wollongong relay.

The club also used to take part in the Corporate Challenge, a fortnightly 4.5km run from the domain around the gardens. It was a perfect event for the time we worked in the city. Qantas moved its HQ to Mascot in 1993. For a couple of years, we also had our own regular club run (a time trial) across the Harbour Bridge from Cumberland Street to Milsons Point and back.

In 1982 the first World Airline Road Race was held in Golden Gate park in San Francisco, hosted by the Delta Dusters, and was attended by the following Qantas runners: Jon Jenkins, Steve Ruston, Andy Doldissen, Steve Frampton, Paul De Mott, Geoff Burke, (can’t identify the guy in the red cap at the back), Ian Howe, Carl Clarke, Lou Lombardi, ??, Dave Mellor, Pat Holland and Harry Evans. We are not sure who the young boy at the front was. 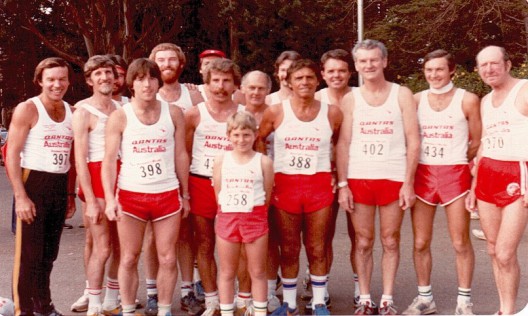 In those early days, the Club was boosted by a number of very talented cabin crew, including Tony Burns, Hans Visch and Tony Costello.

In 1987 the Qantas Running Club hosted WARR in Sydney and ran from under the Harbour bridge around Mrs. Macquarie’s chair and back through the city streets. 582 runners completed the 10km course and 790 the 5km.

One of largest attendances of Qantas runners at an overseas WARR was at the first London event held in Hyde Park in 1985. We had cabin crew runners bidding to be on certain crews so that they could either arrive on race morning and be dropped at Hyde Park to run, or for those who had arrived as crew a day or two before, ran the race and were then picked by the crew bus, en-route to Heathrow for the trip home.

In 2004, after the use of the name Joggeroos lapsed, the club ran under the motto of “The Running Roos” with a new logo

From the early years, we have 2 life members who dedicated an enormous time in supporting the club. They are Steve Ruston, the 1987 WARR host chairman, and Carol Harris, Hon Sec for many years,

In 2007 Qantas Running Club again hosted WARR in Sydney, this time around Darling Harbour with 318 runners completing the 10km and 648 runners in the 5km. the Gala dinner and awards was held for 800 in the Sydney Convention Centre where a performance by the local indigenous group stole the evening’s entertainment. 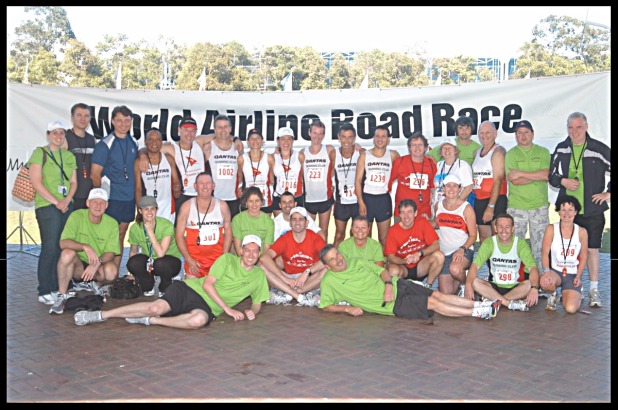 The club has been sending Runners to attend WARR each of the 25 years it has been run. Early success led to a lean patch in the mid years but a resurgence occurred from 1997 onwards. For some time, the club has targeted the T shirt completion and has produced the winning design no less than 6 times in the last decade plus.

Two club members, as of 2016, have completed in all bar one City to Surf (no mean feat). They are of course Lou Lombardi and Bob McNair. 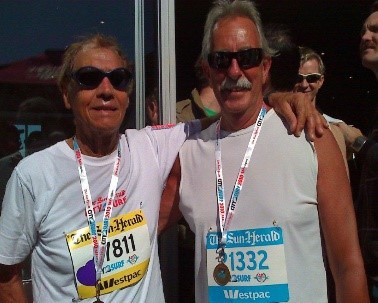 The Club continues to promote local and interstate runs for all Qantas employees their families and friends.

If you would like to share some history please email the Newsletter editor Neil Campbell  at  Nortona@outlook.com